Heard about Facebook messenger bots but not quite sure what it is?

More importantly, not quite sure how Facebook messenger can help you grow your business?

Well, you’re in the right place.

We’re going to start by laying the foundation of what a Facebook messenger bot is.

Then I’m going to share a few examples of how you can use Facebook messenger to grow your business. This part is very cool!

Finally, we’re going to review the  best tool on the market for getting your first messenger bot off the ground.

Before we dive into the answer, I want to put this out there – I’m not a big fan of using the word “bot” as that sounds like you’re trying to automate human interaction.

So to keep the connection alive, let’s refer to Messenger Bots as Messenger Marketing.

Facebook Messenger Marketing is simply a way for you to build relationships with your customers through conversation.

Let me explain this in another way.

Have you spoken to your friends using Facebook Messenger? Of course you have.

It’s also highly likely that you’ve subscribed to receive emails from other websites.

Ok, so think of Facebook Messenger Marketing as the combination of these two communication methods.

Now, rather than sending long emails and wondering whether they’re going to be opened, you can send a concise conversational message and increase your open rate to as much as 88%.

It’s a pretty powerful scenario to be in as a business owner when you think about it.

By the way, I’m not suggesting Facebook Messenger Marketing will replace email marketing, it’s just another way for your business to communicate. A less formal and more conversational approach.

Once your audience have agreed to engage with you via Facebook Messenger, you can send them both automated messages (this is where Bots come in) or personalised messages manually. Similar to email marketing.

Facebook Messenger Marketing makes so much sense when I think about how far we have come in digital marketing.

I remember in 2009 it was all about blogging, SEO (getting on Google) and forum marketing.

You could easily write a 3,000 word blog post and expect readers to read the entire article (assuming it was the good $hi*). Send an email to your subscribers and you’d expect more than 30% of them to open your email. Now, getting close to a 10% email open rate is a celebration!

Ultimately, we’re competing for people’s attention and it’s why our message needs to be concise, on point, personable and in multiple places.

It’s the same reason why video, Instagram and Snapchat stories and podcasts have become so popular.

That’s why having a conversation with a prospect customer using Facebook Messenger works so well. It’s instantaneous, personal and easy to use.

What makes Facebook Messenger unique compared to other social media platforms is the fact that it requires a two-way conversation and it’s immediate.

This is what excites me about Facebook Messenger, the fact that you can now go so much deeper, so much faster with your customers.

3 Examples Of Using Facebook Messenger Marketing To Grow A Business

Aesthetic By Science Sells $5,000 In T-Shirts Within 3 Hours

ABS are a fitness based community in Bulgaria and used Facebook messenger to sell $5,000 worth of t-shirts in 3 hours.

There was no advertising spend.

The first thing they did was send customers an introduction message on Facebook asking them what they’re interested in and whether they wanted to continue receiving messages.

Then, when their t-shirts were ready to sell, they sent people a two-sequence message making around $5,000 in 3 hours. See what they wrote below. 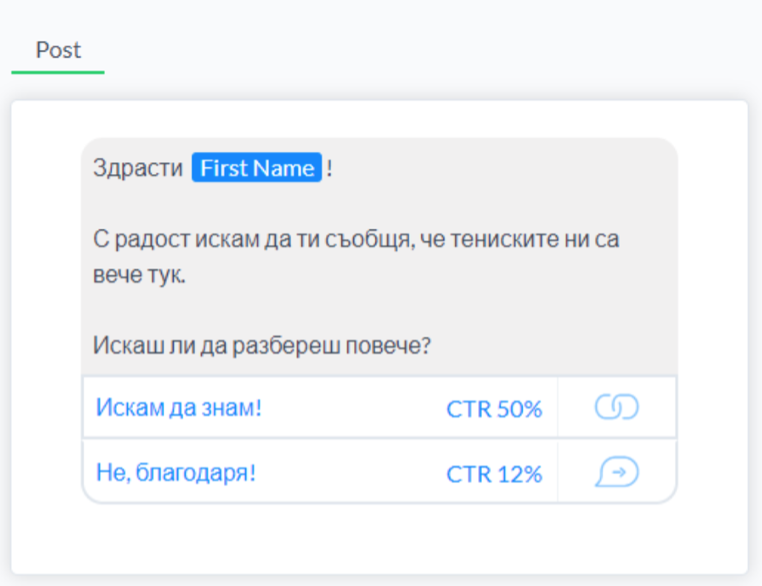 Hey First Name I am happy to say that our t-shirts are now online!

Do you want to see them?

For those interested in seeing the t-shirts, ABS then sent the second sequence: 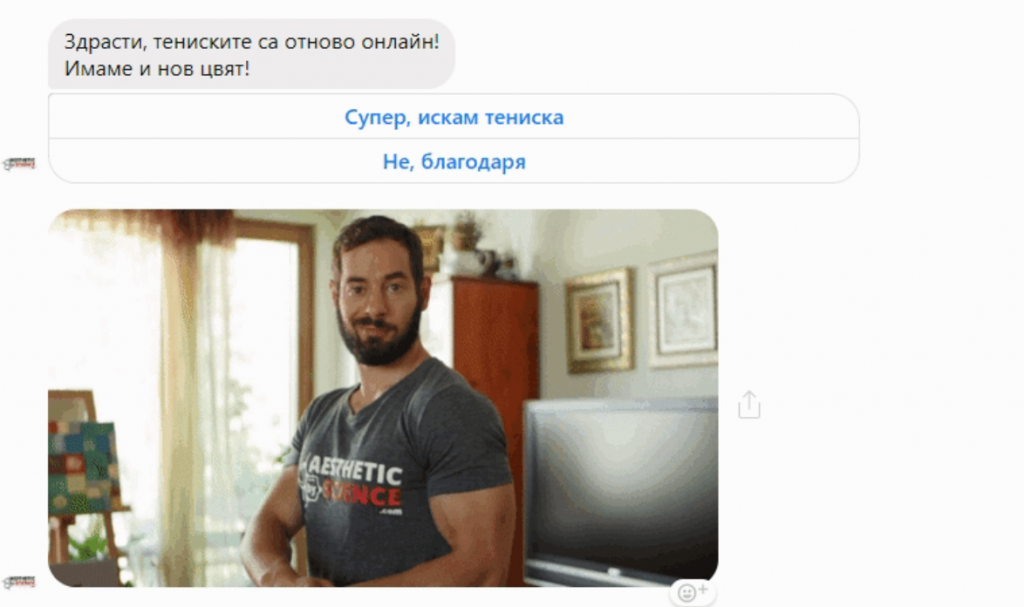 We have a new color.

The results were very promising.

If you’ve read my post on generating 50 email subscribers without having a blog, you will know how important it is to gain email subscribers in order to grow your online business. Here is a perfect example of using Facebook Messenger to help you achieve this.

Let’s start with an overview of the steps:

Sarah essentially created a Facebook Ad to a competition which users could enter by sending a message containing the word “WIN”. Once users sent the message, Sarah would send the below response: 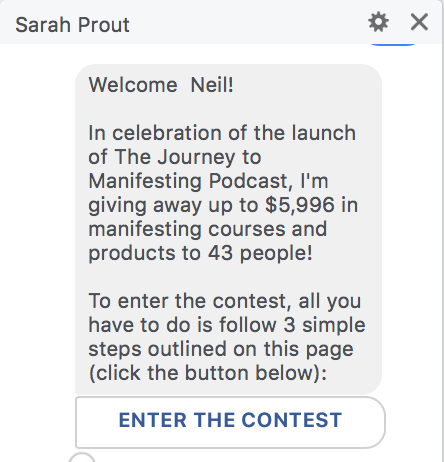 When a user clicks on “Enter The Contest”, they’re taken to a landing page asking them to enter their email address for the competition. 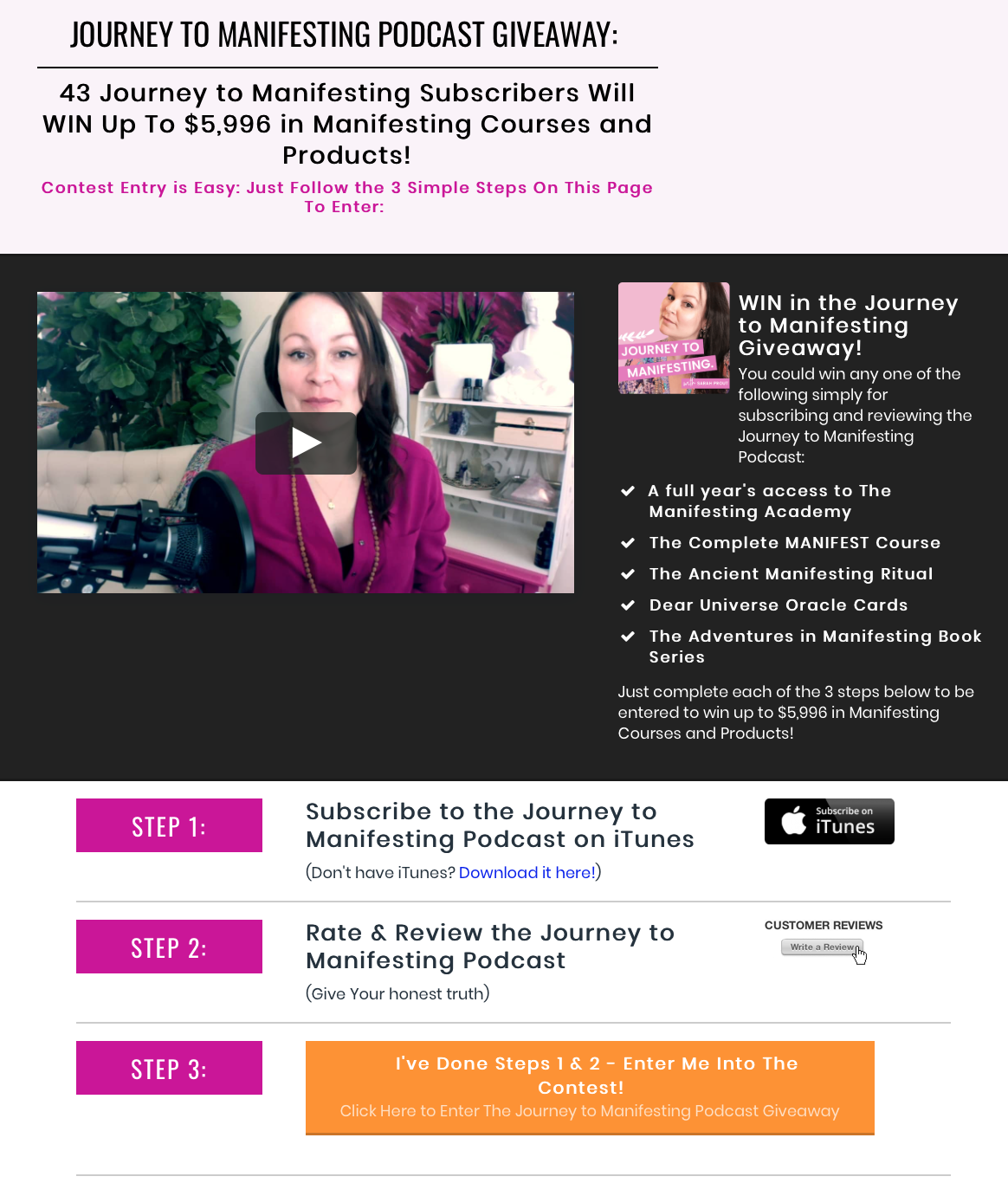 Not only would Sarah now have their email address, but she could also message them using Facebook Messenger whenever she wanted.

I really like how Sarah has clear calls-to-action and gives users a choice: 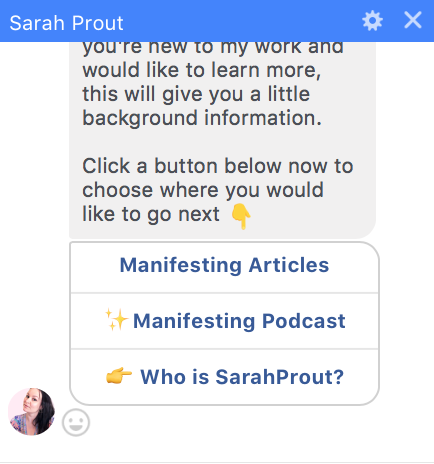 Fiesta Mexicana, a local mexican restaurant, wanted to entice more people to their restaurants with as low a cost as possible.

The winners of their competition would receive a free meal for two and everyone who entered would get a free starter.

The strategy: use Facebook Ads to get as much exposure as possible , then use Facebook Messenger to engage the audience and enter them into the competition.

Overall, Fiesta Mexicana spent $146.12 and reached 171 competition entries, which is an impressive $0.85 cost per lead.

In the end, 33 people redeemed their “free starter” voucher, and they now have a database of customers they can keep in touch with.

A quick summary of how they did it: 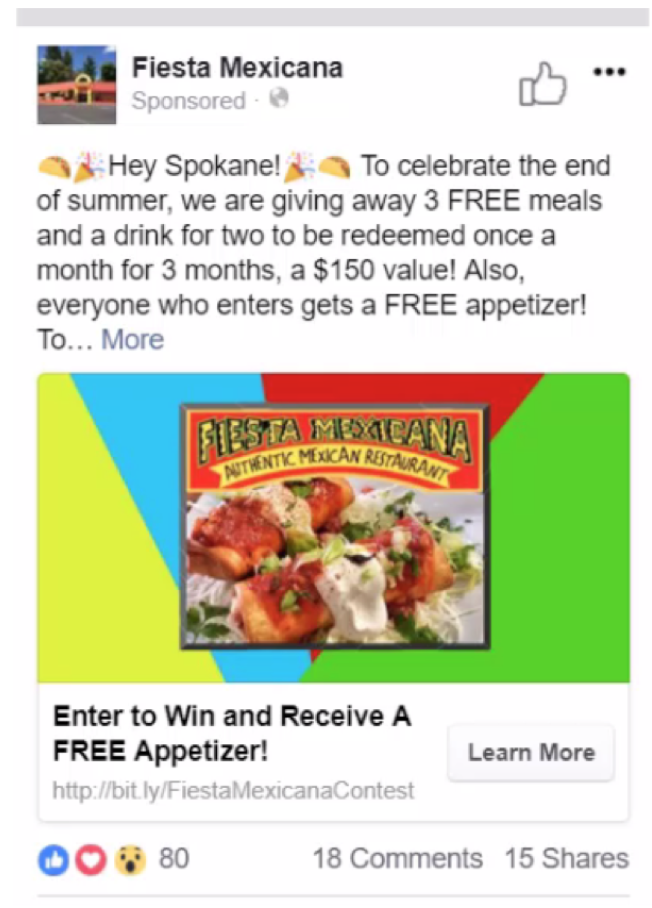 Step 2: Send people who clicked on the Ad to a specific landing page with details of the competition and call-to-action with “Send To Messenger”. 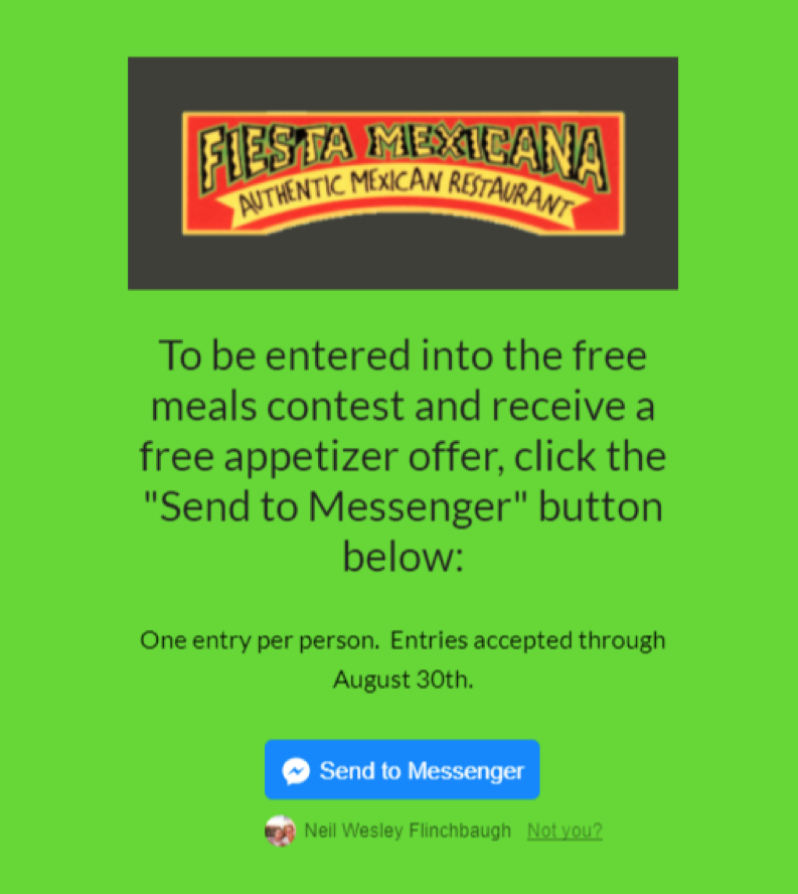 Step 3: Send message and ask user to enter into the competition 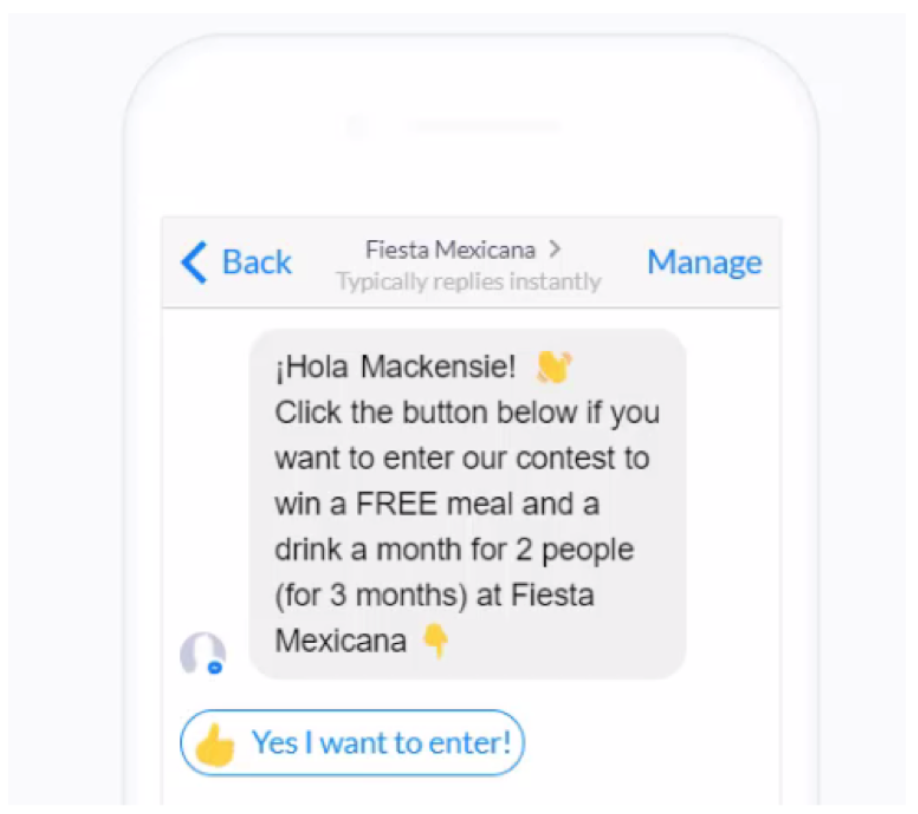 Step 4: Enter the user into the competition and send coupon for their ‘free starter’. 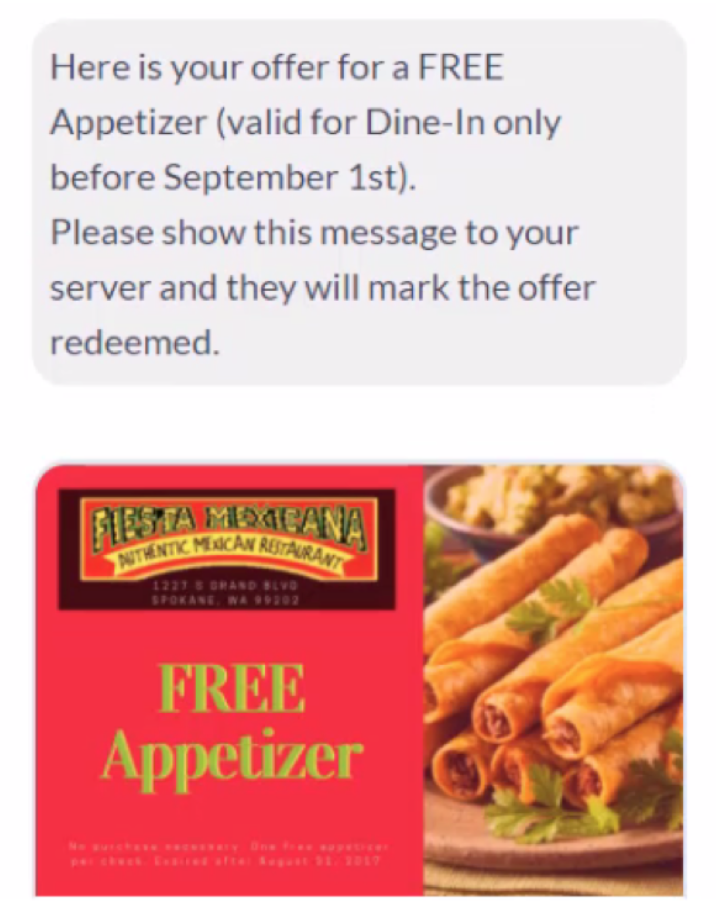 Step 5: People could then present their offer at the restaurant and the waiter would click “Appetizer Redeemed” to accept the coupon. 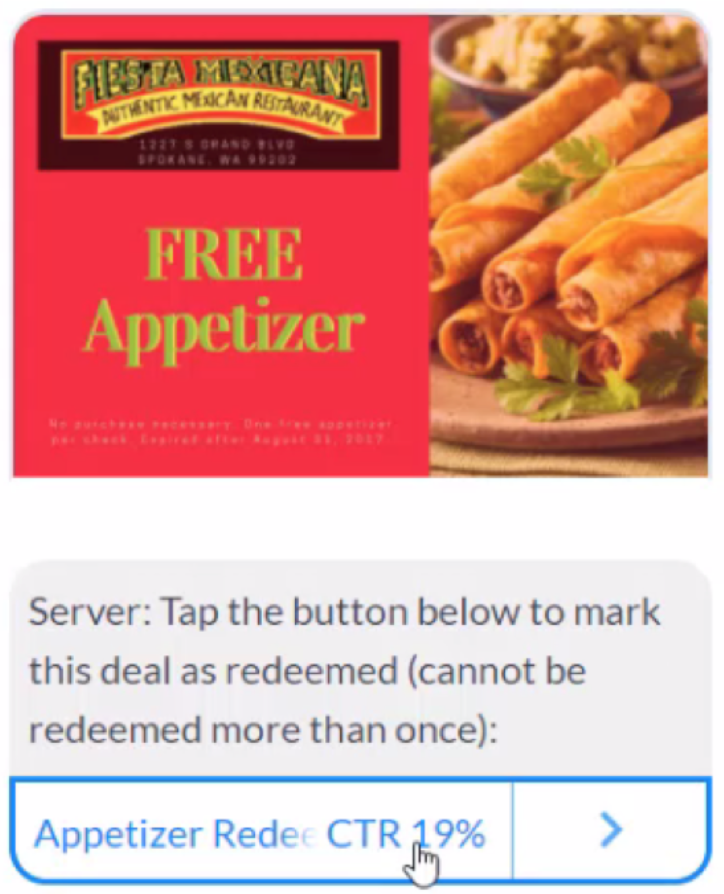 Step 6: A reminder was sent entrees with the deadline date and encouragement to use up their coupon. 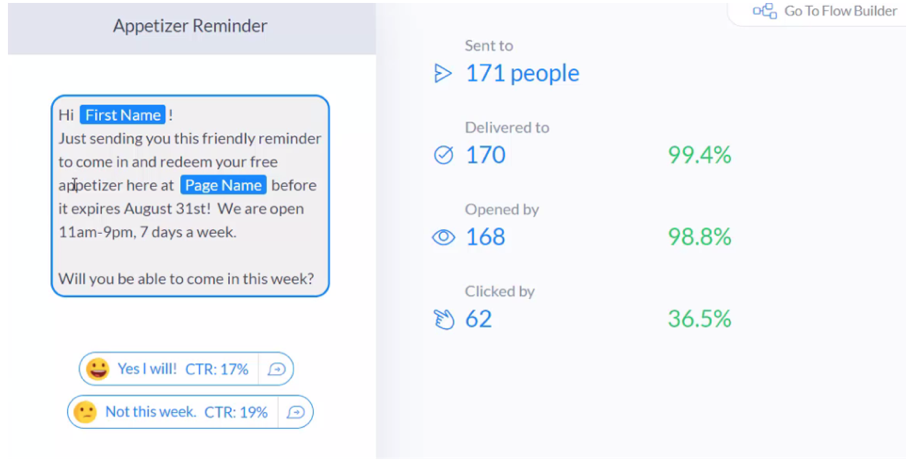 As you can see, there are multiple scenarios you can use Facebook Messenger Marketing to grow your audience. All you have to do is start.

Time to show you how to setup your first Messenger Bot. I’m going to use manychat, which is one of the most popular messenger builders out there. (I think once you have explained exactly what the bot part means at the beginning of the blog, it will make sense you now referring to them as bots here).

The core purpose of the Messenger Bot I’m about to build is to start a conversation with people who are interested in working with me to help grow their business online.

<VIDEO TO BE ADDED SOON>

I’ve shown you a few examples of businesses that successfully used Facebook Messenger to connect with their audience, but don’t feel limited to these strategies.

After all, the platform is still very new and what works for one business may not necessarily be the optimal strategy for you.